2017 AANE Annual Conference: My Workshop on Language and Mythology

Hello OLLI Interview: Autism in the Age of Neurodiversity

Advance publicity for my OLLI course on autism is in full swing. Last week (on December 6), I attended an Open House in Pittsfield and gave a short pitch, and then (on December 7) I appeared on local public access TV in a half-hour interview, available here.

The interview was a lot of fun, giving me a chance to give some of my background, and to tell my own story of discovering autism. The interviewer was kind enough to let me ramble on, and we ended up not having time to discuss one of the questions she had for me, and one related issue that I had been prepared to explain.

All of this will be covered during my course this winter, as I explore (and try to explode) some of the myths about autism.

The first missing item was one I had described to Virginia, in advance of our interview, that December 7 was always an emotional day for me, because it marked the anniversary of the death of the uncle I never knew. I described to her the almost unbearable sadness I experience when I think of how devastated my mother (and her parents) must have been to lose her only sibling.

Virginia, with her background in psychology, was aware that this account flew in the face of the common misconception that autistic people do not experience intense emotions, especially empathy. She asked me if I’d be willing to describe my experience, but, alas, we ran out of time.

Hans Asperger, one of the pioneers in describing autism, was very well aware of the rich emotional life of autistic children he met in his clinic. In commenting on his seminal 1944 paper, Uta Frith observed, “From Asperger’s descriptions throughout it is clear that he believed autistic children to be capable of having strong feelings, and to be disturbed only in their ability to manifest such feelings appropriately.”

I was also prepared to talk about one of the other myths of autism, as another example of the items that will be covered in my OLLI course. There is a thing called central coherence, often characterized as the ability to “see the forest for the trees.” Based on many research studies, it was mistakenly thought that weak central coherence was a central feature of autism.

To illustrate what had been done, here is an example of one of the tests that could have been used. 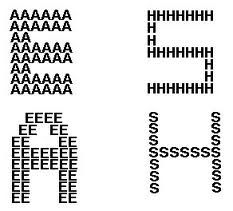 A diagram such as this would have been presented to the research subjects with the question, “What do you see?” (Sometimes the same effect is created with geometrical shapes, such as having small squares within a large triangle.)

“Whoa!” said MIT researcher Nancy Kanwisher. She suggested that maybe we are asking the wrong question. Given instructions that the answer being sought was “what is the larger image?” she found that autistic people performed almost identically (and perhaps a little better) on these same tests.

Her conclusion? Autistic people find the details more interesting, and that’s what they will report in an unstructured environment. They actually have no difficulty at all seeing the big picture. Bang! There goes another myth.

We’ll examine many such shortcomings of autism research, and discover ways that the autistic experience is genuinely different. I’m looking forward to a lively discussion.