My Early Experience as a Student of the Western Abenaki Dialect

A Tribute to (my cat) Barack

Barack has been diagnosed with terminal lymphoma. The story of how he came to me, and how he received his name, is for another time. For now, I have been reflecting on our friendship of more than 12 years. As I write this, he is still vibrant, active, and loving. I know his days are numbered. Here are some reflections I wrote a couple of weeks ago, and two photos of him from earlier this month, not too long after his diagnosis. 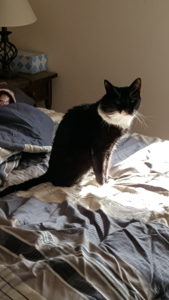 Barack purrs on the edge of sadness,
His swelling illness cannot dim His regal bearing.
Miss Fortune has stalked and found him,
Emaciating his body but not his soul.

He came to me in sadness, after we lost Lori;
He has lived with me in splendor, never losing his feral self.
I’m told I have given him a good life. I have tried,
and he has returned my affection 100 times over.
It has been a wonderful friendship.

It is said that all good things must end.
However true that may be, it is never easy.

Barack lived long enough to bridge the gap
between the promise of Obama and the new promise of Biden.

Barack’s time will come to an end soon.
I hold on to a wish that he die naturally, without a struggle
but I know that I may be called upon to be God
and be the one to determine when his life must end.
Being God is not for wimps.

As I contemplate his burial site and shroud
I am reminded of how he came to me, and how he huddled
under the bed in the guestroom, not emerging except at night
for six months or more, sleeping on the bathrobe of Lori’s on which he arrived.
He will go out in the same way, in a spot along my fence
where I can see him and Topaz, reunited in my mind and affection.

We have had some time to share some sadness
but he is not doing his part; he purrs and I cry.
I would not be so sad except for the joy I have known.
Barack has been a special kind of companion for all these years.

Joy and Sorrow have been my constant companions throughout my life.
And the words of The Prophet echo in my mind

Your joy is your sorrow unmasked.
And the selfsame well from which your laughter rises was oftentimes filled with your tears.
And how else can it be?
The deeper that sorrow carves into your being, the more joy you can contain.

Or the other way around: the depth of my sorrow is a reflection of the joy I have known.

As Barack grows weaker by the day, I come more and more to realize how much I will miss him.