The Four Kingdoms of Autism

This past winter, I taught a course on autism for OLLI, our local (Berkshire) adult education outfit. Along the way, I discussed the theme of friendships.

One of the overriding messages I was attempting to convey in the 6-lecture course was that autism is not a deficiency, but a difference. To illustrate this, I shared examples of my collection of friends.

Although, as a youngster, I always felt left out of the inner circle of my classmates, I had plenty of friends. In recent years, I have asked some of those former classmates whether I seemed odd to them, and maybe that’s why they left me out. No, I was told, they never consciously excluded me, they just figured I was shy and I didn’t want to play with them.

This is a very common experience, I’ve come to learn, among autistic people. We long for inclusion, but never quite seem to find it, always looking in from the outside because we just don’t “get it” when it comes to social bonding. That stereotype, although accurate, should perhaps be revised to include the recognition that our desire for sociability and friendship is no less than in our neurotypical counterparts. We simply, for whatever reason, don’t pick up on the behaviors that lead to social integration in that dominant neurotypical culture.

Instead, we are steered by a different set of rules, and we make our own friends, in our own way. I’ll have more to say on the friendship theme in future posts, and I’ll share more of the examples I gave in my lectures. For now, I thought I’d post this one, since I came across a related document.

In my OLLI course, I flashed a picture on the screen and described it this way:

And these were my nerdy friends from high school. My 1963 graduation took place at Tanglewood. Notice that I am the only one with a girlfriend. 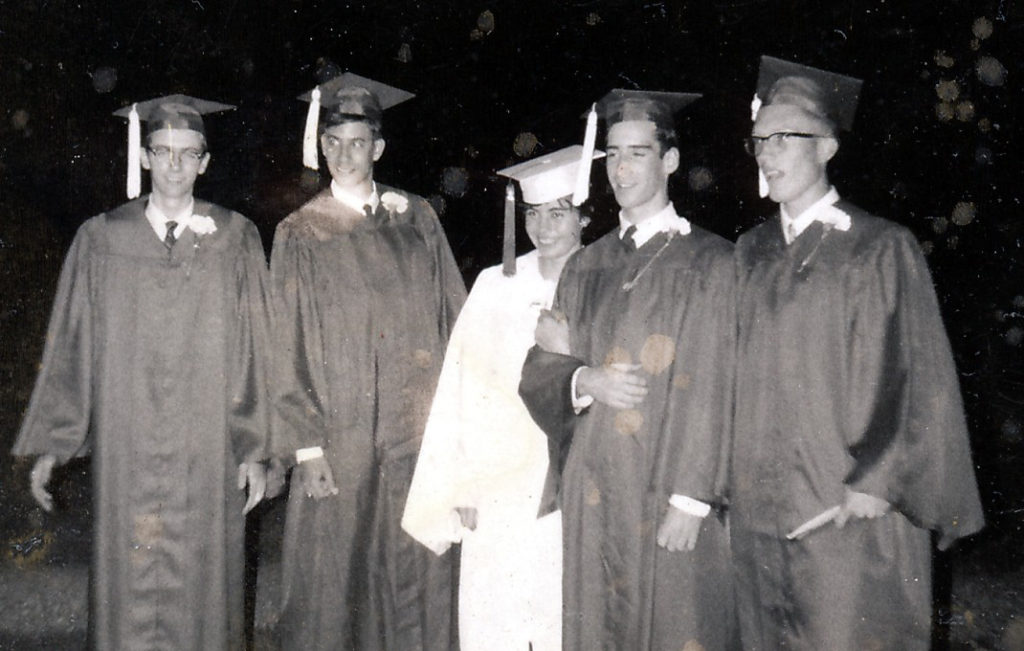 By coincidence, the four friends here were all on the same page of my high school yearbook.

Notice a common theme here? Lots of mentions of poker and gambling, money and odds. All part of my early life. I think I placed my first bet on a horse at the Barrington Fair when I was 14. I liked to think that I looked older than my age, but I wasn’t sure I could pass for 18. I put $2 down at the window and the teller looked me over. “How old are you?” he wanted to know. “18,” I lied. “Go away!” he waved me off. “Why?” I wanted to know. “You have to be 21!” So I went down the row a bit and tried again at another window. That guy never asked me my age.

I started investing in the stock market when I was in sixth grade. My uncle Paul, married to my father’s sister Jo, was a stockbroker at Goodbody and Company in Pittsfield. He told me to call him anytime for information or to place an order. He told me I could call collect. In those days, Stockbridge didn’t have dial phones, and a call to Pittsfield (two towns away) was a long-distance call, requiring the use of a long distance operator. It also happened that I was in school at the times when the stock market was in session, so I had to ask permission from my teacher, Fritz Brown (probably my least favorite teacher from grade school years).

Mr. Brown would escort me around the corner to the Superintendent’s office, and tell the secretary of my request. She would point to either the conference room or the inner office, whichever one was vacant at the time, and tell me I could go in there. I later figured out that they were listening in on my conversation from the phones in the outer office. I thought that was rather weird, because why would they care about what I was talking to my uncle about? Unless, of course, they didn’t believe me, and thought I was making contact with a Russian spy or something.

They would have heard some pretty boring conversations, although my uncle Paul was a loquacious guy. After I gave the operator my instructions, I would hear the phone ring and be answered. “I have a collect call from Michael, will you accept the charges?” Uncle Paul’s hearty voice would say, “Put him on!” and we would be off to the races, so to speak. After pleasantries, I would ask, “How’s Radio International doing today?” and he would tell me, “I’ll have to send a wire to New York to get a quotation — call me back in an hour and I should know then.” The stocks I was interested in generally didn’t appear on the ticker-tape very often.

So I would have to repeat the drill, and when he gave me the bid-ask spread, I might place an order to buy one or two shares at, say, $13. All of this was a whole lot more exciting to me than listening to Mr. Brown drone on about diagramming sentences, or whatever it was we were supposed to be learning that day. I hope he got a thrill out of listening in on my conversations. How I figured out he was doing that is asfad* and it involves the dog eating my homework, or something like that.

My cousin Bruce, along with Pete and Bill, were the core of my circle of nerdy friends. I don’t remember ever discussing our social situation with them at the time; I guess we all just accepted our lot in life, not being part of the “in crowd” (or at least that’s how I think of it now, looking back). We all went on to have high-powered careers, and it would seem that our social awkwardness in high school was not a precursor of a less-than-satisfying life.

Nadia Tao Wend was the only girlfriend I had in high school, and that for only one year. I think she identified with my friends, as a bit of a misfit in her own right, having moved into town just before our senior year. Or maybe there was more to it than that. After not seeing her for more than forty years, we reconnected when she came to Stockbridge, with her sister Darcy, for one of our high school reunions.

As you can see from her yearbook entry, she was known as Wendy at school. Her family called her Tao, and I called her Nadia. She pronounced it nahdja, and I thought it was a beautiful name, though I think I called her that because she asked me to. In between those high school days and our reunion, I had written a story about another love affair. It was published under the name Running in the Dark, and was based on a true incident. I asked my love interest at the time if I could use her real name, and she insisted that I not do so. We had both been married (to other people) for much of the time we were involved, although I was divorced by the time the story was written. So I proposed to use Nadia as the name in the story, and my friend expressed surprise, “Did you know that is the name of my sister?” I did not.

The original Nadia and I stayed in touch for a while after that reunion, and I shared with her my then-recent revelation that I had identified as Asperger’s. After hearing my story, she did a little research. We had lunch one day in New York City, where she was then living (I’ve lost track of her again), and she shared with me, “You know that Asperger’s thing? I think I might have a touch of that!” I didn’t ask her why she thought that, because it didn’t seem odd to me at all. Her father was an incredibly erudite and creative man, and would probably fit to a T the stereotype of the absent-minded professor. He was the one who inspired me, at age 16, to become a vegetarian. But, again, asfad*…

*a story for another day