Hiking To and Beyond Laura’s Tower

My grandmother (Grace Josephine Bidwell) Wilcox was one of the seminal figures of my youth. She was a wonderful story-teller, and she would enthrall me with tales of Stockbridge history, as well as stories of her younger days. Some of those stories involved her grandfather, Edwin Curtis Bidwell. I sensed that she had the same kind of relationship with him as I did with her.

One of the stories she told me about her grandfather involved a carriage accident he had in Vineland, New Jersey, where she grew up. In the accident, one of his legs was badly injured, after which he was able to get around only with the aid of a cane or a wheelchair. He was sixty years old at the time, too soon to retire from his pharmacy business, yet his mobility impairment prevented him from getting around as much as had been his wont. To help keep his mind active, he took up the hobby of collecting genealogical information on his family.

He had plenty of family to keep track of, since he came from a long line of Bidwells, and had ten children of his own. Only a few of those children lived into adulthood, but he still had many grandchildren. My grandmother told me she was quite surprised when he told her he was giving all of his records to her. She had not shown much interest in his genealogical pursuit, and she thought herself an unlikely candidate to receive all his work. She never admitted it to me, but I suspect that might have been the thing that triggered her interest in history. She went on to become a librarian, and, while employed at the Stockbridge Library, started a collection of objects, clippings, and correspondence which became the Historical Room; an important feature of the Library, the care of which eventually became her full-time job.

Unlike my grandmother, I was not surprised when she told me she was leaving the family records to me. I had certainly taken a shine to her stories and had frequently perused the family books and correspondence she kept, in several shoe boxes, on the top shelf of one of the steel cabinets in her office. I have recently discovered that she had other records that she donated to the American Antiquarian Society prior to the time I began to hang around with her. 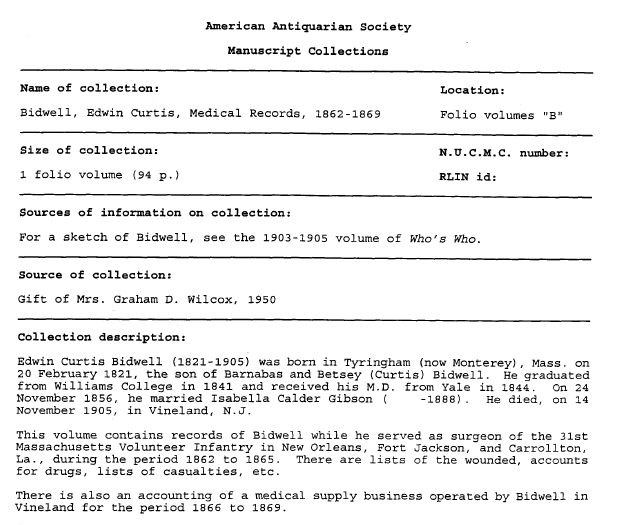 I do have to confess, though, that the mantle of family historian has been taken up by my brother Rick, who remained involved with Stockbridge affairs (including many years as Chief of Police), while I went off to seek my fame and fortune elsewhere. I have given him copies of all the relevant documents I possess, and also shared those with the Stockbridge Library and The Bidwell House Museum in Monterey.

I’ve never been to Vineland, a deficiency I hope to correct soon. My interest in that place was recently piqued when I discovered that Barbara Kingsolver’s latest novel is centered on a house in Vineland. 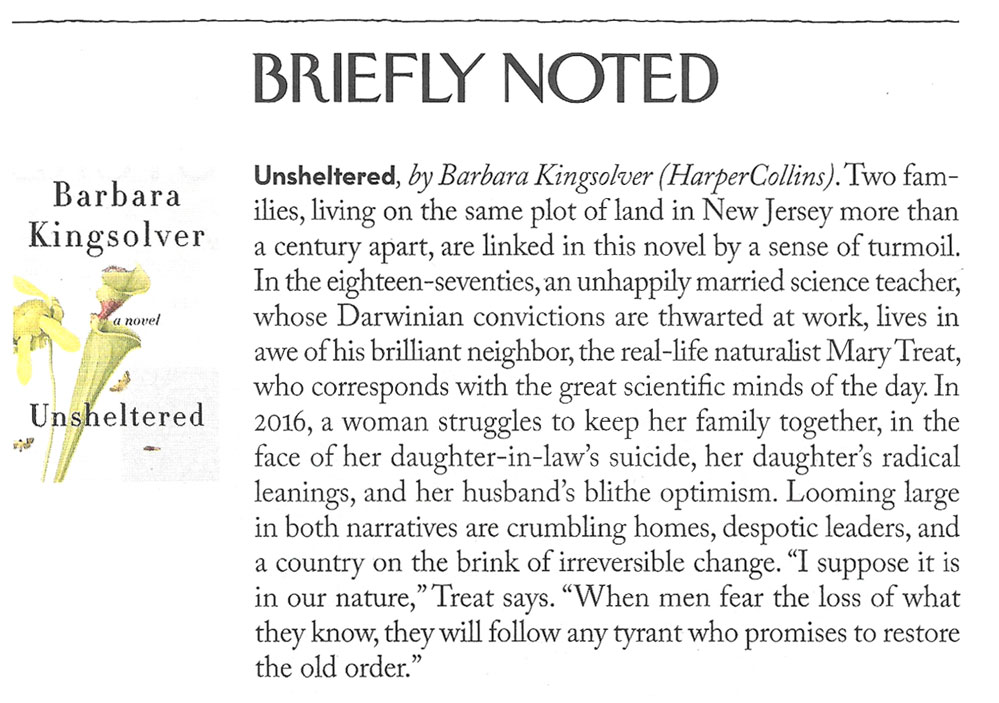 It’s a clever interweaving of two stories; one that took place in very recent history (nearly three years ago), and the other in the same locale in the early 1870s, when Vineland was still a new Utopian experiment. Edwin Curtis Bidwell moved there in 1866.

This is a snippet from a book I found (The Early Physicians of Vineland NJ) while looking for historical accounts of early Vineland. Note that this account of E. C. Bidwell (ECB) was written by his son (and my great-grandfather), Edwin Hugh Bidwell. The accident referred to in this first paragraph is undoubtedly the one I had heard about from my grandmother.

This short account contradicts (or at least glosses over) some other information I have from family documents. I will have to dig them out for later display and confirmation, but my impression is that he chose to leave the medical profession after his service in the Civil War because he was traumatized by what he had witnessed.

ECB’s pre-Vineland life was sketched out by his son in the Early Physicians book: 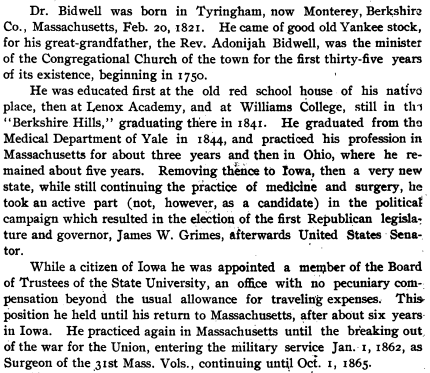 Vineland was established, in part at least, to promote the abstinence movement, to attract Freethinkers, and to be an agricultural showcase. The name itself was a tribute to its founder’s vision of growing grapes to produce non-alcoholic wine (Vineland is where Welch’s Grape Juice got its start). 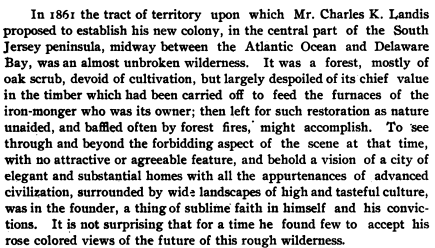 Dr. ECB started his medical career close to where he grew up, as a general practitioner in Otis, Massachusetts. He was active in the abolitionist movement in Berkshire County. It is likely that Charles Landis’s Utopian ideas would have appealed to him.

ECB was an early proponent of the germ theory of disease. 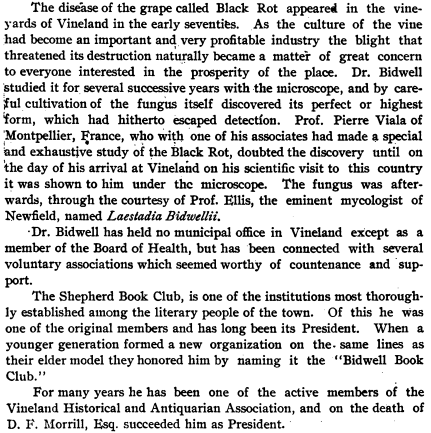 My grandmother told me that his work on the Black Rot fungus was connected in some way to the discovery of penicillin. I don’t remember if she explained that to me, or was just mentioning it as a matter of family pride. I’ll put that on my already long list of topics to research when I get a chance.

I expect to share more information on my great-great-grandfather as I come across it, both online and in my grandmother’s papers. It is fascinating (and almost surreal) to me to realize that I was close to someone who had, in turn, been close to someone who was born nearly two hundred years ago, and served in the Civil War. That’s a very personal connection with a large stretch of the history of this country.