Hiking To and Beyond Laura’s Tower

This post is my first follow-up to the preliminary announcement of my planned 90-minute lecture and discussion, to be given sometime in April or May of 2019. In subsequent posts I will share more background material on some of the illustrious characters in the history of Stockbridge, as well as more stories from my childhood.

The Berkshire Hikers are a group that go out on the trail every Tuesday, year round, in all kinds of weather. On a recent Tuesday (August 28, 2018), I led the group, consisting of 18 intrepid souls, over a mountainous trail that included a stop at Laura’s Tower in Stockbridge. Despite the heat advisory that had been in effect that day, only two of the original 20 hikers signed up decided to cancel.

As the MapMyHike map (from my phone) here shows, we began at the end of Park Street in Stockbridge. I lived in a small house on Park Street until I was about 9 years old, and I have many fond memories of that time, which I will recount at other times. Here is a small sample. 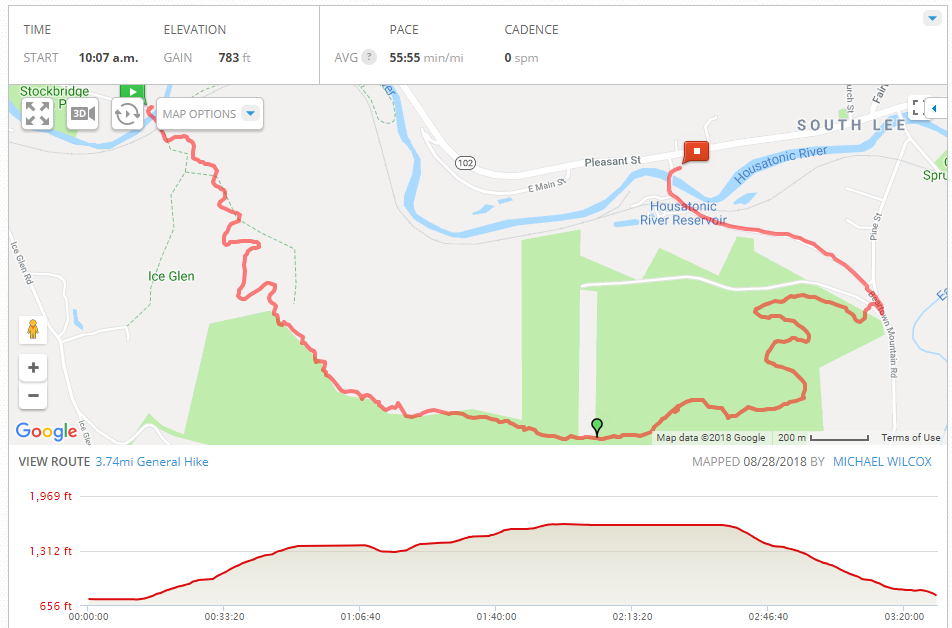 That story is about the days before dial phones, and now I have a smart phone. I’m still uncomfortable with the phone part, but the smart is lots of fun. It allows me to see maps like this one, and to find my location in realtime.

Based on many hikes, by comparing distances on maps and signs with the number reported on my phone, I know I have to add 10% to the MapMyHike distance to have an accurate reading. In this case, my phone said 3.74 miles, so adding the 10% gives about 4.1 miles. The altitude profile tends to be fairly accurate, and shows that we gained about 900 feet from the parking lot by the Housatonic River to the top of the ridge, where we had lunch. The long flat line at the highest elevation represents time sitting still at that highpoint. The hike took about half an hour longer than I had anticipated, but given the heat, that is not surprising.

On the map, above the green pin, you can see a long white rectangle. I explained the origin of this to our group when we reached that point on the trail. The tale involved moving the Stockbridge/Lee boundary about 20 yards to the east, as a result of surveying work done around 1960, when route 102 was rerouted over the hill there, instead of following the curve of the River past what was then the Stockbridge Lumber Yard. The house where I spent my teen-age years was on the north side of route 102 (East Main Street in Stockbridge) exactly north of that white rectangle. The large sign that is still there (“Entering Stockbridge” on the east side, and “Enter in gLee” on the other side) was not moved when it was discovered that the town line was actually on the west (not the east) side of our house. Instead, the Great and General Court passed a special piece of legislation that ceded that strip of land to Stockbridge, thus throwing all maps into confusion, although allowing my family to remain residents of Stockbridge, and keeping the boundary where it had traditionally been thought to be.

My family moved to that house in South Lee (as we called it, although it was — we thought — not in South Lee, but in Stockbridge!) on Thanksgiving Day in 1956. My sister Sarah (youngest of the 5 of us) was only 2 at the time, and she had been the last one to come down with the mumps. She spent the whole day screaming in pain, poor thing. My Uncle Phil had helped us move, and he and my father went up on the hillside to round up some firewood, since the only heat source in the house was a pot-bellied stove.

I later learned that the previous occupant had been a Miss Murphy. It was a very large house (suitable for a family with 5 children), and there was a separate living space that went unheated and unused (except in warm months, when it became play rooms for children, and a place for magic lantern shows for the neighborhood kids). In that “apartment” (as we called it), had once lived a local chemist, who worked at Hurlbut Paper Company. Dr. Jessie Minor was a PhD in the days when that was quite uncommon for women. My mother told me, as an example of her brilliance, that during the war, Dr. Minor worked on the Enigma project in England (I learned this long before I knew of Alan Turing), the code-breaking that helped defeat the Nazis.

In writing this post, I was wondering if my memory of how to spell her name was accurate, so I did a web search, not really expecting to find much, if any, information about her, but I did come upon this snippet, which validated my recollection, and also my impression of her age at that time.

Shortly after we moved to South Lee, I became friends with Dr. Minor, who told me many stories. In the summers, she recruited a bunch of local kids to help her make Christmas cards for the Indian reservations, as part of her work for my church’s Missionary Society. That is a story for another time, set in her apartment on the second floor near where the Mobil Station now is, at the head of Park Street. One of the tales she told me was of her time living in that house in South Lee, where I had moved to long after she left, when I was 10 years old. She moved in to the apartment there because it was within walking distance of her job at the Hurlbut mill. The house was owned and occupied by a widower, Mr. Murphy, who also worked at the mill, and his adult daughter. Every working day, Miss Murphy (as Dr. Minor referred to her), would make lunch for her father and bring it over to him at the mill at lunchtime. At some point, while Dr. Minor was living there, Mr. Murphy died. His daughter evidently never accepted that explanation for his absence, and every day the mill was open she would make his lunch and bring it for him. At first, the mill workers tried to explain to her, but eventually gave up, and just accepted her offering every lunchtime.

By coincidence, that same white rectangle on the map outlines the central focus of what had been a ski area on that mountainside. It was originally built back in the dark days of the Depression, when the CCC provided jobs for men (no women were allowed) to work on public works projects. There are several maps and pictures on the link just given; a couple of them are reproduced here. This first map shows the approximate location of a rope tow that more or less followed that (by now infamous) white rectangle up the hillside. 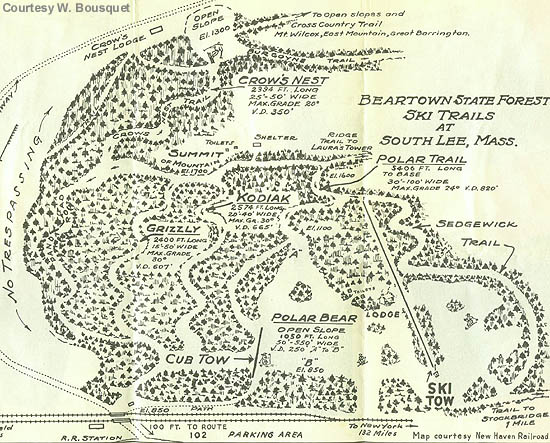 Many thanks to Ellen, one of our hikers, for finding that website. She also took the picture of the wheel shown in this post. That is the same website that I had used to find similar information about the operation at Jug End Resort, but I hadn’t thought to look there for Beartown. I think the place where our group had lunch is approximately where the word “Kodiak” appears on the maps.

I had pre-hiked the route a couple of times, to be sure I knew where this trail went, since it is poorly marked in places. My friend Joe and I had gone most of the way a few months back, when there was still some snow on the ground, and we had spotted the wheel pictured here. A week or so before this hike, my friend Bess and I went the entire route, because I wanted to be sure I knew the descent all the way to the Hurlbut mill, since Joe and I had not finished the downhill section, having returned to Park Street the day we inspected the trail. Bess and I did not see the wheel (probably because it was hidden in the undergrowth), although we did find a series of metal poles that must have been part of the rope tow apparatus.

According to an email from Joe, Marina (one of our regular hikers) “says about that wheel that Doug (Marina’s husband) thinks the wheel is from a Model A, and there would have been another at the bottom so the rope tow, looped around both, and the car was running to make the wheels spin, bringing skiers up the hill.”

Notice the misspelling of “Sedgwick” in the ski area trail map. On this map of Stockbridge, taken from Google Maps (which, amusingly, is accompanied by a picture of Main Street in West Stockbridge), the town line is shown to go approximately in the middle of the white rectangle. Along the Housatonic in Lee, the state forest (green shading) goes down to the River, but in Stockbridge, the area next to the River is part of the Sedgwick Reservation of the Laurel Hill Association. The trail we hiked along the ridge above the River runs along the border between Beartown State Forest and the Sedgwick Reservation. 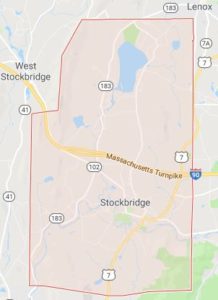 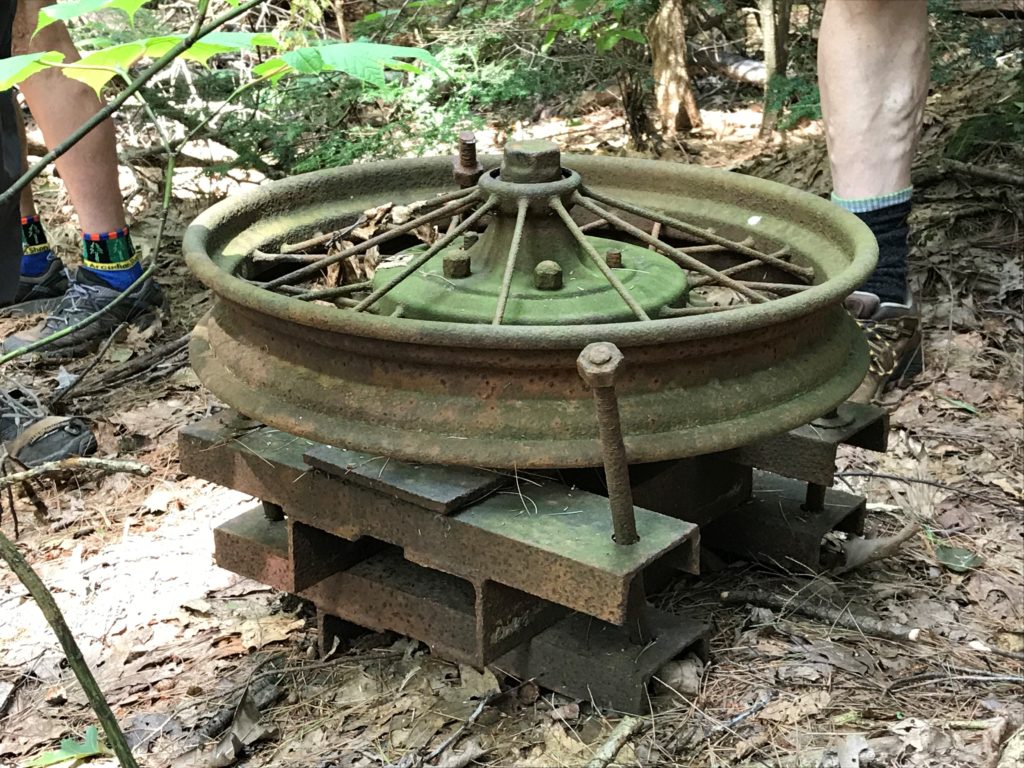 Wheel thought to be from a Model A, used at the top of a rope tow. Photo credit: Ellen Whitaker 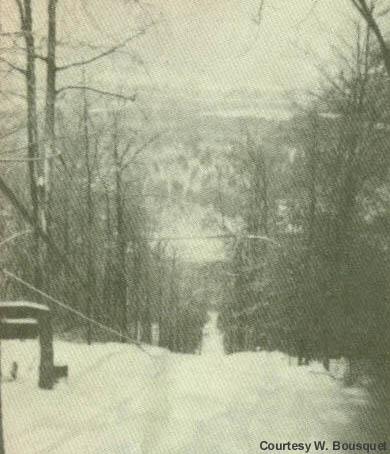 As to the ski area, the information on the web site does not correspond to my recollection. A friend of mine and I used to take our skis over there in the winters, and hike up the slope as far as we could without getting too exhausted, and then ski down. One didn’t do too many runs that way. Of course, we had the bearpaw snowshoes with leather webbing, and our ski bindings were the old metal springs. We also explored the area during the summers, and I don’t remember seeing any remnants of the rope tow or any buildings, such as are shown on the map. So I do not think the area could have been operated into the 60s, as the website indicates. I’ve asked around, and I can’t find anyone who recalls there being an active ski area there during the 60s, so I’d appreciate hearing from anyone who remembers one way or the other. (Of course, there is the old saw that “if you remember the 60s, you weren’t really there…”)

From looking at the maps and the photos, I think we were probably using the area called the “Polar Bear” slope, so it’s possible those other features existed and we just didn’t get that far. Still, I don’t remember (and I lived there until 1963) any activity on the mountainside while we lived there. On the other hand, I had probably discovered girls and had things other than skiing on my mind.

Finally, some advice about ticks: “When checking for ticks, start at the bottom. First the feet and the ankles, then the legs. Keep going up until you’re high enough to introduce yourself to the person you’re checking and explain what you’re doing.”