Behind any account of the indigenous peoples in my part of the world lies a tragic tale of the end of a civilization that had flourished for thousands of years, and the near-extirpation of a population and its culture.

My plan (at least hope) is to publish several future posts on specific topics, including my exploration of what was called by the English invaders “The Indian Trail” that connected the two great rivers over the mountainous region of what is now northern Massachusetts.

My subject matter will include its current state, as well as the history of the original natives of the area where I live (including eastern New York as well as western Vermont, Massachusetts, and Connecticut).

I mean this to be a working entry. In other words, I will change and add to this post as I have time and new information. Forgive the rambling nature of the writing; keep in mind that it is a work in progress.

I hasten to add that I am not an historian, and I rely on casual research that I have done on the internet, as well as other reading I have done, and stories I have heard from my family members as well as from members of the Stockbridge-Munsee Community (descendants of the original inhabitants of this area). I expect I will make many errors, and I will attempt to correct them as I learn more.

Also, in trying to keep this entry somewhat manageable, I have simplified many things, and have not always acknowledged that there are often multiple interpretations of names and events. Also, for convenience, I will sometimes use the current names for places or features (such as “the Hudson River”) even though they obviously had different names before the Europeans arrived.

Documenting the History of the Mohicans

The original inspiration for this investigation came from some trips along a portion of Mahican-Mohawk Trail by the Berkshire Hikers. We hiked the section within BNRC’s Hoosac Range Reserve. This relatively easy hike along the ridge starts at the parking lot on route 2 in North Adams, just above the Hairpin Turn, and goes south for about 3 miles, with the return route being nearly identical, for a nice 6-mile hike. Along the way, there are spectacular views to both the east and the west.

This trail passes over the historic Hoosac Tunnel, which has a storied history. It first opened for business in 1875, and is still in use today. Our leader, Bess, did some research on the origins of the tunnel, and its construction, and shared what she had learned when our group arrived at the place on the trail that is directly over the tunnel; not far from the infamous Central Shaft, in which many workers died.

I offered to look into some of the earlier history of the area. In particular, I had always been puzzled by why the automobile route, now designated as route 2, had come to be known as The Mohawk Trail, when I knew that the Mohawks had not lived around here.

I became interested in the Mohicans when I was very young. My grandmother Wilcox was a librarian in Stockbridge, where I grew up, and she had started The Historical Room in the library. I frequently went to her office after school; it was cool and quiet, in the basement of the library; far from the chaotic regimes of home and school. It was a sanctuary for me, where I could read and do my homework in peace. In a world that didn’t understand autism, it was one of the ways I created accommodations for myself (I can see now, in retrospect). As a bonus, my grandmother would sometimes tell me stories, and show me things in her collection. But I digress (not for the last time, I promise you).

My grandmother had a close connection with the Stockbridge Indians, both as an historian and in real life. 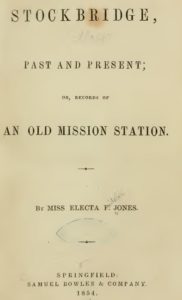 I just love the flowery language in these old books, and the words and phrases that are at once archaic and erudite. I will, for example, humbly attempt to perform the office of cicerone.

This oft-cited book, by Electa Jones, starts out with a bang, and reveals the startling advances in our knowledge that have occurred during the century-and-a-half since the book was published. I have not (yet) seen an attempt at a definitive timeline of when the Algonquins arrived in this area, but it almost certainly preceded the time of the Sycthian empire in central Asia (dating back to about 3,000 years before the present time). 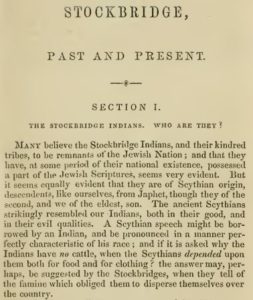 Address of the Mohican News publication

I’ve already used two different spellings of the short name, used by the English, of the native people: Mahican and Mohican. They are both pronounced Muh-HEE-can, although there are many variations that appear to be acceptable. I’ve shown here ^ the address of the newsletter of the tribe; they currently reside in Wisconsin. The name of the people is variously reported as seen here (Moh He Con Nuck), and as “Muh-he-ka-neew” or “Muhhekunneuw” and any number of other versions. The neuw/neew suffix seems to have been the singular form.

Similarly, the precise translation of this phrase is elusive. The problem is twofold here. For one thing, like most (perhaps all) of the indigenous peoples of the Americas, the Mohicans did not have a written language; only an oral tradition to recall their history. The second factor is that the language died out as it was originally spoken. Currently, there are no living persons who grew up speaking the language. There are only a handful of native speakers of similar, related languages. The Dutch evidently had several spellings for what they heard, including Mahikander (sounds kinda Dutch), Maikan, and Mawhickon. The English version was Mahican/Mohican, and the French had their own name, not taken from the people: Loups (wolves). Other variations are given by Jones [p 14].

Fortunately, there exist dictionaries that were recorded by Europeans during the colonial era. The spellings and pronunciations of Mohican words that were adopted by the Europeans were heavily influenced by the native language of those who first encountered them. This area was at the confluence of English, French, and Dutch attempts to achieve hegemony.

Muh-he-can-nook has been variously translated as “people of the continually flowing waters” or “people of the waters that are never still” or other variations. In the oral tradition of the people, the restless waters apparently referred to their place of origin in the west, perhaps the Pacific Ocean. Some have even speculated it might have referred to their passage across the Bering Strait, although that interpretation does not seem to currently have much support. The “flowing” of the waters seems to have originally meant the tides, as alluded to in Jones [p 15], so may have referred to their residence on the Pacific Ocean.

In any case, the people identified with the rivers in this region, which represented to them a connection with their origins. They, along with related tribes, became collectively known to the Europeans at the River Indians. Their own name for the river we now call the Hudson was Mahecanittuck.

“Mohican” and its variants refer to the moving waters, and the nuck suffix meant “people of” — the neuw/neew, as mentioned, seems to have been the singular form.

Similarly, the suffix we see spelled as “nic” or “nick” was a place designation. Thus, for example, Housatonic meant “the place where the river bends” (although I’ve also seen it translated as “the place on the other side of the mountains” [from the Albany area]), and Taconic/Takaughnick meant “the place in the forest.”

The Mohicans in this area eventually became known to the Europeans as the Stockbridge Indians, and the Stockbridge-Munsee Band in Wisconsin are descendants of those native people (along with some other native groups that they teamed up with on their long forced removal to the west).

There is an active effort in that community to reconstruct the original Mohican language. The challenges are obvious, but one piece of good news is that there are a few (3) elders of the Munsee tribe in Canada who are native speakers of that dialect, which is closely related.

The History of the Road now known as The Mohawk Trail

When the Europeans first arrived, there was an already-ancient trading route going over the mountains from the Connecticut River to the Hudson River. The English called this the Indian Trail, and, in order to facilitate their expansion into the western regions, they began to construct a road suitable for wheeled vehicles, beginning on the western side of the Connecticut River near their settlement in Deerfield. They more or less followed the Indian Trail, except where that footpath was too steep, or otherwise unsuitable for their wagons. This route eventually became the automobile road we now know as route 2.

I have some maps of the trail networks at the time of first contact with the European intruders, as well as some references to the early road-building by the English settlers.

How did the Mohawks get their name on the Trail?

The territory controlled by the Mohicans extended from the lower tip of Lake Champlain all the way down the the upper reaches of Manhattan, and from the Schoharie River on the west to the Westfield River in the east.

As far as I can tell, the portion of this road that came to be known as The Mohawk Trail is almost entirely within Mohican territory, except for the very eastern portion, which seems to have been controlled by the Pocumtuck tribe. And therein lies the tale…

The Mohawks made a name for themselves (in this context) with a single event that occurred in 1664.