Early Draft: to be revised upon completion of our hike tomorrow (May 29).

As of the night before, we have about 15 people signed up for a 6-to-7-mile hike tomorrow, featuring 3 peaks in 3 different states, and a bonus visit to the high-point in Connecticut (not its highest peak, although that is nearby).

We will start at the south end of East Street in Mount Washington, at the Massachusetts/Connecticut state line (bottom right center of the map below). The elevation at that point is about 1,900 feet. Our route takes us almost due west, weaving back and forth between the two states. The first stop is the peak of Round Mountain, which, at 2,296 feet, is the second-highest peak in Connecticut. Almost directly behind us, to the east, is Connecticut’s highest Peak, Bear Mountain, 2,320′, on the other side of East Street (which, south of the state line, is called Mount Washington Road). 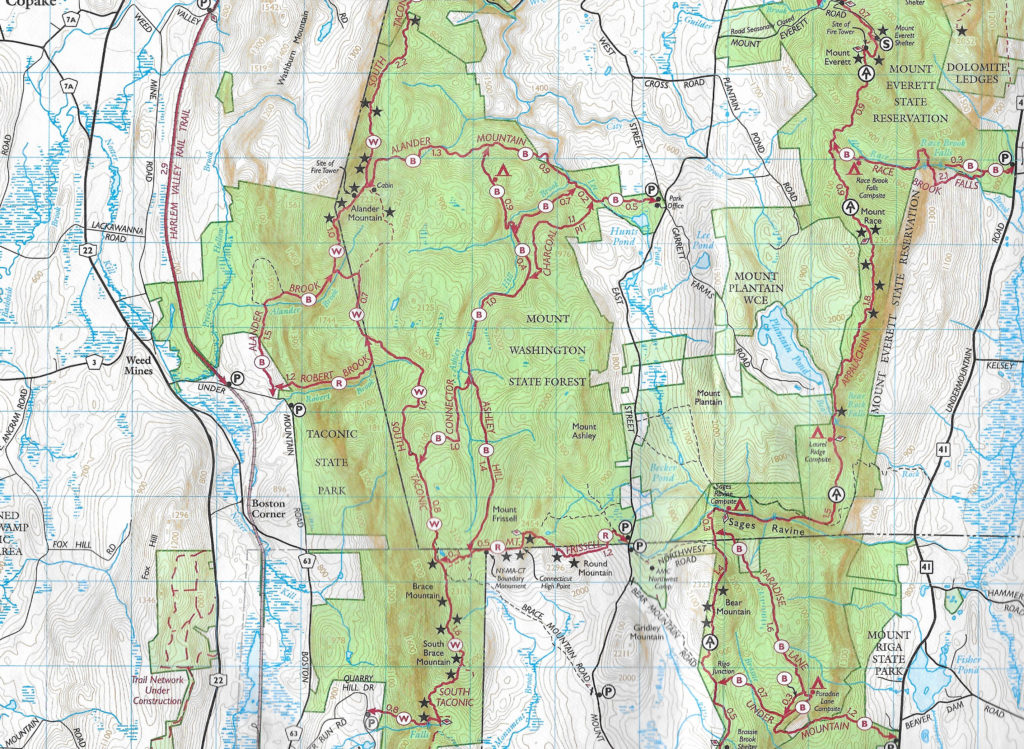 This first half-mile, with its 400-foot climb, is extremely difficult, at times going up some rather steep rock faces. The views from the top of Round Mountain, however, make the effort worthwhile. We can look back to Bear Mountain, almost due east, and can see many other peaks, such as Mount Everett, Mount Ashley, Mount Race, Brace Mountain, and others. On a clear day (which we expect tomorrow), Mount Greylock is visible in the far distance to the north. Our 360° view also takes in Riga Lake and South Pond.

After taking in the sights, we will again move westward, this time dropping down along some more rock ledges. After a short descent, we will again head upward, and cross the state line, to the peak of Mount Frissell, which, at 2,454 feet, does not even make the list of the ten tallest Massachusetts mountains. There will be no need to pause here, because the summit of Frissell is completely surrounded by thick trees, offering no views. We will continue along the trail for another couple of hundred yards, which will take us into Connecticut. There, we will find a marker for the highest point in Connecticut, and enjoy some beautiful views to the south.

Continuing west, we will soon come to the 3-state marker, at the point that the Mass/Connecticut border comes to and end and the Mass/New York border takes over. Another ¾-mile trek brings us to the western end of the Mount Frissell Trail, where it connects with the South Taconic Trail.

At that intersection, we come out of the forest, to be greeted by spectacular views of the Catskills in the west, with lush farmland below. We are now at the farthest southwest corner of Massachusetts, although the state once continued to the west. We can look down on Boston Corner, which once defined that corner of the state. Stay tuned for the story of why that changed.

We have now walked about 2 miles; the most difficult part of the hike. Our journey from here will have some slight elevation changes, but will be mostly along the ridgeline. We will take a short detour south to have lunch at the summit of Brace Mountain, a popular place for paragliders. Also a popular place for rattlesnakes to sun themselves, so we need to be watchful.

After lunch, we will retrace our steps for a quarter of a mile, and plunge back into the forest. We will hike along the Ashley Hill Trail, going to the north until it intersects with the east-west Alander Mountain Trail. Once we reach that trail, we will turn right and go another half mile to the end of our hike at the Mount Washington State Forest headquarters.

Round Mountain (not to be confused with nearby Round Ball Mountain, where we hiked a few weeks ago, or Rounds Mountain).

I could find very little information about Round Mountain. There are a couple of mentions in my Appalachian Trail Guide to Massachusetts-Connecticut (1994). Here is a Wikipedia entry for it:

Round Mountain, 2,296 feet (700 m), located on the border of southwest Massachusetts and northwest Connecticut, is a prominent peak of the Taconic Range. The peak and southern slopes of the mountain are within Connecticut; the northern slope lies within Massachusetts.

The mountain is located within the towns of Mount Washington, Massachusetts and Salisbury, Connecticut; much of it has been conserved as part of Massachusetts’ Mount Washington State Forest and Connecticut’s Mount Riga Forest Preserve. The south side of Round Mountain drains into Riga Lake and South Pond, then into Wachocostinook Brook, Salmon Creek, the Housatonic River, and Long Island Sound. The north side drains into Sages Ravine, thence into Schenob Brook, the Housatonic River, and Long Island Sound. Round Mountain is bordered by Mount Frissell to the northwest, Mount Ashley to the north, and Bear Mountain to the east.

Round Mountain is traversed by the Mount Frissell Trail which connects with the South Taconic Trail to the west and the Appalachian Trail to the east.

Similarly, there is very little historical information about the other two peaks (Frissell and Brace). There are plenty of articles about hiking there, and the other activities, such as high-pointing and paragliding, but nothing I could find about how they got their names.

In contrast, there are many well-written accounts of the prize fight that took place in Boston Corner (referred to as Boston Corners in some sources). One of these appeared in Sports Illustrated in 1973. Parts of this story (similar to other versions) may be apocryphal in the sense that the famous fight was symptomatic of the lawlessness of the area rather than the cause of New York’s annexation, which evidently had already been agreed (though not enacted) at the time of the fight.