Autism in the Age of Neurodiversity: Course Announcement

Does Our National Accounting System Reflect Our Values?

We (I’m wearing my Economist’s Hat here) have long been aware of the hidden cost of externalities, those insidious, unmeasured penalties incurred by society in a profit-driven economy.

In our national accounts, for example, we measure the dollar value of energy produced (such as electricity or gasoline), but we do not record the cost to society of consuming these goods. When consumers purchase electricity, we record that as a positive contribution to Gross Domestic Product (GDP), without considering the negative impacts (such as pollution, or the other detrimental health effects on miners) of its production.

Ironically, some of the costs that are later explicitly borne by society, such as rebuilding after a storm made more vicious by global climate change, or caring for people who suffer from lung disease, are counted as positive contributions to our well-being (at least, as measured by GDP).

For me, some recent publicity about the costs associated with recovering from this year’s hurricane season have brought home the point that our accounting system is not just loopy — it may actually be helping foster bad policy decisions.

There is something very wrong with an accounting system that considers storm damage a good thing. Yet, in effect, that’s what our national accounts do. This article in Weather Underground points out that actual costs may be higher than those mentioned here. Yet, even this (possibly lowball) estimate amounts to about ½% of GDP. And this was only one of the seriously damaging storms we have seen this year.

When (and if) the damage done by these storms is repaired, that economic activity will be recorded as a positive addition to GDP. No deduction will be made for the resources and assets that have been lost. So, in this example, $102 billion will be added to our GDP, but we will actually be no better off. Except, of course, that income will have been produced for those involved in the recovery effort, and there will be ripple effects as that income is spent throughout the economy. Still, if these storms had never happened, instead of spending money on repairs, we presumably could have used these same funds to build new schools or hospitals or to do any other number of useful public works.

Yet, the damage goes unrecorded. Note this blithe dismissal in the latest Treasury report on the economy: 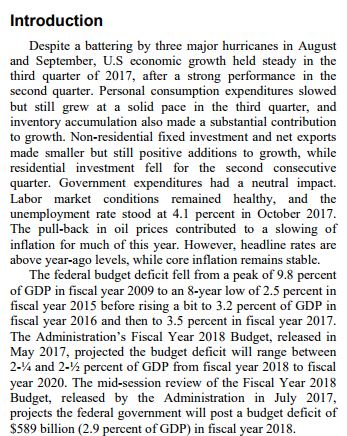 As people in Houston repair their flood-damaged houses and replace their automobiles that were destroyed, all of this will be recorded as positive economic activity. Yet these people will be no better off than before the storm in any substantive way, and how do you account for the loss of family treasures such as photographs and documents?

In real ways, we, as a society, are now paying the piper for bad policies and decisions made over the past many years. Yet, no one is calling us to account for this in dollars and cents. Surely this is an oversight that can be corrected. But where is the political will to do so? Another rhetorical question, to be sure..