What Do Plants See?

Let’s See if I Can Tape This All Together

Birds Did Not Evolve from Dinosaurs; They *Are* Dinosaurs

The January 2017 issue of Scientific American contains a fascinating article (behind a paywall) on the evolution of birds. Using birds as an example, the author makes several interesting points about evolution. Some are quite specific to feathers and such; others are more general, such as

Evolution has no foresight; it acts only on what is available at the moment…

His example of bird evolution points out that feathers evolved long before there were wings and flight; probably originally for warmth, and later for display. He points out

There was no moment when a dinosaur became a bird… It was a journey.

Birds, therefore, are just another type of dinosaur.

Birds as we know them today did eventually evolve long before the larger dinosaurs became extinct. Their mobility (flight) and small size enabled them to inhabit environmental niches that were not able to be exploited by their larger cousins. These same features also enabled them to survive through the cataclysmic event that led to the end of what we think of as the Age of Dinosaurs.

There is a graphic that shows the family tree, in which mammals (which branched off 252 million years ago) are the oldest survivors, followed by lizards and crocodiles. Later came many of the groups of (now extinct) large dinosaurs, such as the sauropods and tyrannosaurs. Later still came groups (also now extinct) that had many birdlike characteristics, followed finally (at least 100 million years ago) by birds resembling those we know today.

The graphic also pictures anatomical features that distinguish birds from other modern animals, such as “quill pen” feathers, a fused spring bone (the “wishbone”), and a keeled sternum to anchor large chest muscles used for flight.

The hallmark traits of birds accumulated over tens of millions of years and in many cases originated for reasons unrelated to the purposes they now serve.

The author does not philosophize or speculate about why birds have been so successful, but he does point out that birds

…carved out a completely new way of life, and today they thrive as upward of 10,000 species that exhibit a spectacular diversity of forms, from hummingbirds to ostriches.

Birds, unlike ants and humans, are not eusocial (although there are a few examples of intergenerational cooperation), nor is flight/gliding unique to them (think bats and flying squirrels). Yet they were here first, and evolution finds it hard to knock out a successful occupant of any particular niche. Perhaps they will still be around long after humans have disappeared. 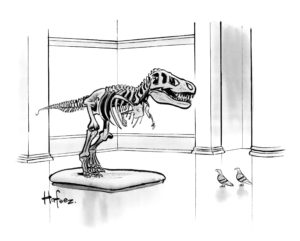 “Frankly, I don’t see the resemblance.“