What Modern Technology Tells Us About Two Famous 19th-Century Brains

Protect Our Benefits: Ask Your Member of Congress to Sign This Letter to the President

I had a doubly wonderful experience today at Jiminy Peak. The conditions were absolutely spectacular. The only things I didn’t like were the crowds (well, it was a weekend, after all, which I usually avoid, but the forecast for tomorrow is for yuck — the “r” word-that-shall-not-be-spoken), and the pesky clumps of white fluffy stuff in the middle of the trails.

I mean, what were all those people doing on my trails??? And those lift lines! Nearly a 5-minute wait, turning what is usually a 10-minute roundtrip into a 15-minute trip. Imagine, only 4 runs per hour! Oh, the indignities I endure!

And, gosh, there was so much of that loose frozen stuff that it was hard to find the ice. I didn’t really mind, though, except that it was more work than I’m used to, turning on those piles of fluff instead of skating on a hardpack surface, but, ah well! By the end of the day, my legs were sore, but it sure was fun.

I mostly stuck to the black trails, unless I inadvertently ended up on a blue one. (There is something odd about ski areas having black & blue as their color codes.) I do have to admit I “sat down” a couple of times. (I refuse to call it “falling” when I just lose an edge and my balance and have my legs go out from under me.) There was one time on Jericho (their only double-diamond trail) when I have to admit my sit-down became a bit more elaborate. Instead of my usual slip, sit-down, get-up-quickly routine; I lost an edge in the midst of a steep, huge expanse of nothing-to-stop-my-slide area, found myself spinning around and sliding head-first, hugging the mountain for about 20 yards. Still, it was no big deal, and when I finally encountered some of that fluffy stuff, I jumped to my feet and pointed my skis straight down the hill to enjoy the rest of the run.

There came a time, despite the warm sunshine and gorgeous conditions, when I knew I should head home. My pass still had half an hour to run, but I knew that if I pressed my luck I might get injured; I was that tired from the thrill of it all. I slung my skis over my shoulder and headed to my car.

I had backed into a parking spot such that there was a huge snowbank behind me. I stuck my skis and my poles into that convenient holding spot and sat down on the back seat to remove my boots. As I finished that ritual, I looked up to see a woman eagerly eyeing my parking spot. Did I mention the area was crowded? There were still people arriving to ski, even though sunset was not that far away. I waved and smiled, and, obliging soul that I am, I got into my car and vacated the spot for her.

I live about half an hour from Jiminy, and when I got home, I spent a few minutes with my snow shovel, removing some of the snowbank around my mailbox to be sure the mail truck could get to it, and cleaning up the driveway a bit. I then went out and fed the horses; all of this while still soaking in the glorious sunshine.

I then went to take my boots and skis into the house. Wait! Boots, can do. Skis? Poles? Not in the car!

Ah, the image of them in that snowbank.

I ran through the options in my mind. The only one that made any sense was to get back in my car and get there as quickly as possible, hoping against hope that my equipment would still be there. I first ran into my house to grab my phone, which I had forgotten in the morning (hence no pictures of what I experienced on the mountain).

As I drove north (possibly a bit over the speed limit), I thought about the scenarios. In the end, I realized there were only two; either the skis were still there or they weren’t. If they were, easy. Put them in the car and go home. If they weren’t, there were many possibilities. Most of them unpleasant. I wondered if my homeowner’s insurance would pay for the replacement of stolen items. I mean, just because I left them unattended for an hour, if someone took them, that’s still stealing, right? “Sorry, we don’t cover stupidity,” would be the answer I would expect.

As I anxiously turned into the parking lot and approached the spot, my heart sank. They were gone!

I managed to find a nearby parking place, and headed up to the building complex to report my loss to Security. I didn’t know what else to do.

Along the way, I encountered a young man who was wearing a safety vest and sporting a walkie-talkie. He looked authoritative, so I approached him. I pointed back to where my car was and started to say, “I left my skis…” and before I could finish he smiled and said, “Customer Services!”

It turns out that he had, from afar, seen me drive away without my skis, and had taken it upon himself to bring them into the office. I shook his hand and thanked him profusely, but I never got his name so I could praise him to his employer.

What a doubly wonderful day!

And so, with a smile on my face and gratitude in my heart, I looked back up at the mountain and took some pictures. The lights were just coming on as the sun was setting. 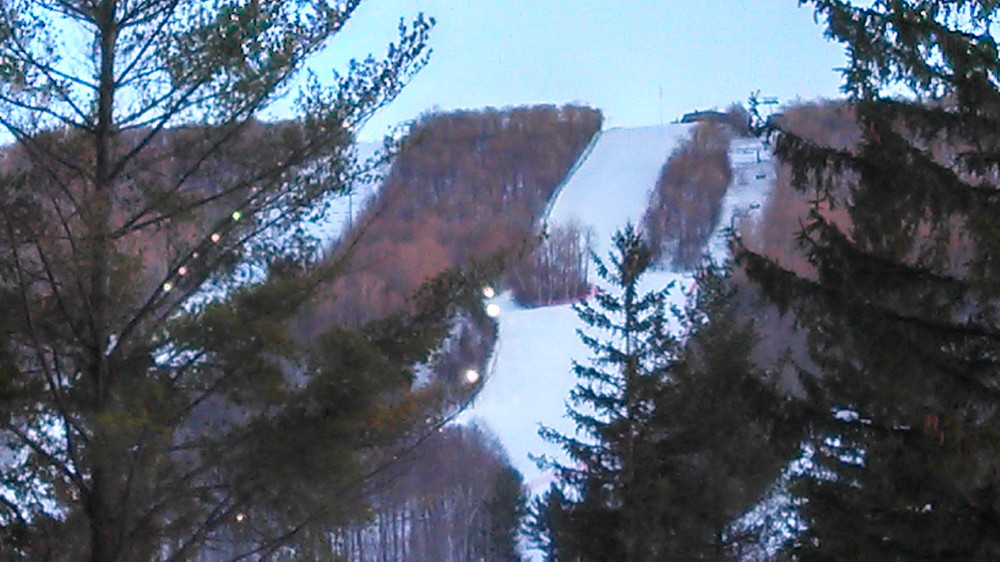